Alternative investments used to be the playground of the elite and ultra-wealthy, but now, small investors can get an invite to the party. 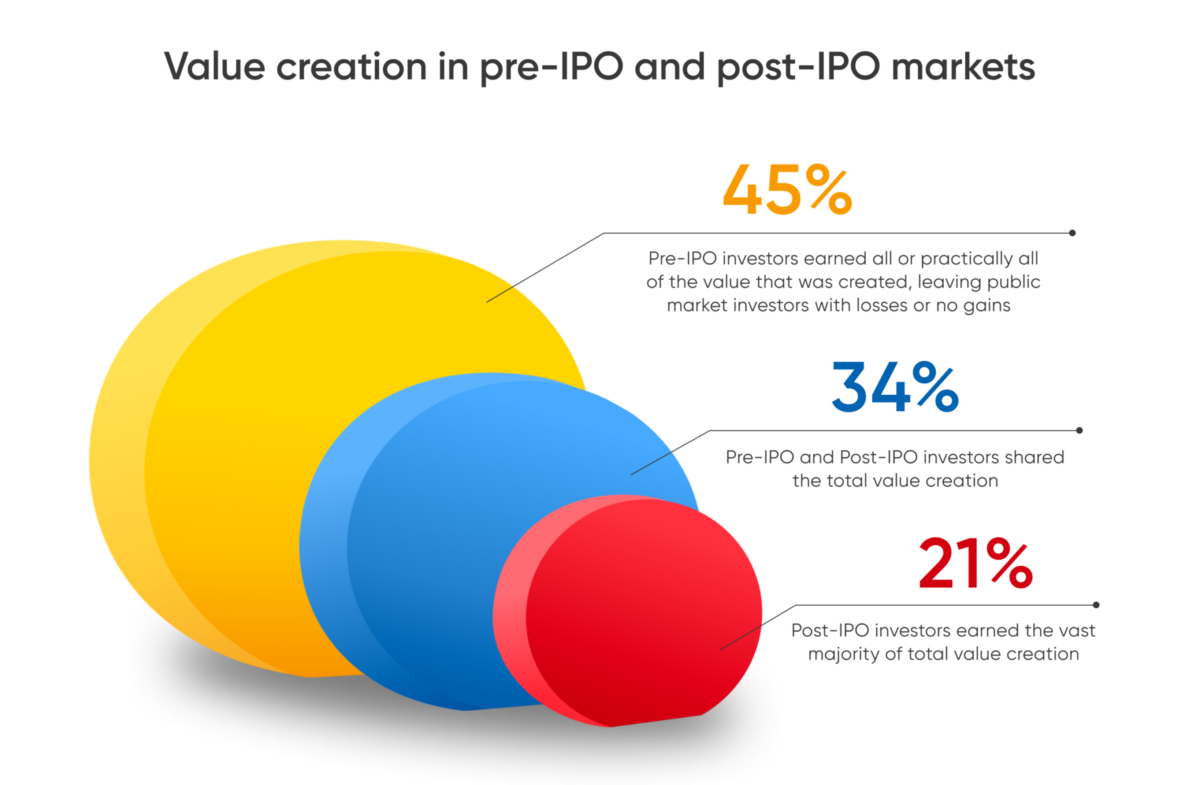 Who doesn’t love buying low on an IPO and sitting back as the price soars? However, the big money is much more often found long before the IPO. As soon as Snowflake was listed on the New York Stock Exchange, it rose 112 percent on the first day, which made it the biggest software IPO ever. But Sequoia had invested two years prior — meaning the company had multiplied its money tenfold before the IPO even launched. The investing game is not just for institutions and financial gurus; NBA basketball player Kevin Durant saw his 2017 investment in Robinhood increase by over 25x when it was publicly listed in July 2021.

Cake for the wealthy, crumbs for the rest?

Time has repeatedly proven that investing in a private company before it goes public remains a winning recipe for the wealthy elite of society, but to secure your invite to the party and be served that profitable slice of cake, you must already be a member of the club.

Smaller investors are left with the crumbs swept from the celebratory table. They simply do not have the necessary capital, connections, or expertise to gain access to the pre-IPOs and exclusive commercial real estate investments. If smaller investors are lucky, they can invest much later on, after the IPO — precisely when big investors are looking to exit, locking in considerable profits. It is at that point that they deem holding the asset too risky, and they move on to bigger and better ventures.

The lost promise of the stock market

In the 20th century, stock markets revolutionized investing. The increased wealth of the middle classes coincided with greater access to investment opportunities, which in turn facilitated the democratization of investing. Since then, even the lower classes have been able to participate in the capital appreciation of such well-known firms as General Motors or Big Blue.

However, the stock market is not the cornucopia for small investors that it once was. In the 1950s, major financial institutions began to enter the market. With this came the development of myriad institutions — pension funds, index funds, family offices — utilizing advanced valuation and forecasting techniques that far exceeded the toolset available to an ordinary investor.

Throughout the 1950s, financial institutions' share of public equity in the US was around 17.6 percent. Today, it has vastly increased to 72 percent. The contemporary automated AI-backed financial system enables banks to track and analyze every single stock and provides them with easily accessible capital. In combination with their superior valuation methods, this allows such institutions to make trades with very low expected profits and profit-to-risk ratios that would seem unpalatable to private investors.

New trading platforms like Robinhood have taken this a step further by gamifying investing. These platforms offer fast and accessible trading along with the ability to purchase fractional shares, raising a new generation of investors who treat investing as a casual expense or a small luxury. Investments through such platforms are being increasingly guided by the same logic that leads people to prefer a cup of Starbucks coffee over a no-name brand, no matter how much cheaper the latter is.. This attitude to investing drives stock prices even higher, perhaps beyond the point where they will ever have a chance to pay themselves off.

In the modern financial ecosystem, IPOs have become more expensive and drawn out. Due to heavy regulations, companies tend to stay private for longer, arriving at their IPO with already exhausted growth prospects. The rise of special purpose acquisition companies (SPACs) since 2019 and their promise of back-door IPOs only serves to further underscore this.

Conversely, financing from private equity funds, angel investors, and even family offices has become more plentiful and easier to access.

Millennials have it even tougher than their older generational counterparts, the Gen X-ers and boomers. Rather than focusing on wealth like the generations before them, many millennials are working for a cause or prioritizing lifestyle over wealth. Despite comprising the largest demographic in the workforce, millennials own just 4.6 percent of total US wealth, whereas boomers collectively own 53 percent.

As a result, small investors are not receiving the crucial growth opportunities that are available to the ultra-wealthy.

The revolution starts with Robinhood

With demand comes supply. Sooner or later, technological advancements will catch up to the demand for increased investing opportunities. While some small investors have turned to speculating on cryptocurrencies, many remain steadfast in their dream of value-based investing by latching on early to the next Amazon or Tesla.

New investment platforms are emerging to meet this rising demand, offering small investors access to pre-IPO companies and the golden years of growth ahead.

Not only this, but the new investing platforms are lowering the entry threshold for small investors and making alternative investments accessible and gamified.

The platforms are typically run by a team of industry insiders who take on the role of brokers between alternative investments and groups of small investors. These insiders tend to have large investment networks that secure them invites to the best deals, which they then pass on to their own smaller investor clients. Another benefit they offer is that they possess the tech and marketing savvy needed to bring a critical mass of small investors together from around the world.

Consequently, these upstart trading platforms have carved out a niche in the Venture Capital economy.

Three examples of such companies are Cadre, Moonshot, and Seedrs.

Cadre is a US-based commercial real estate platform offering small investors the opportunity to invest in institutional-level commercial real estate. Previously, the due diligence and management required for large-scale commercial products were daunting for even the wealthiest of investors. Cadre solves that part of the equation. As its advantages, Cadre appoints at its low correlation with the stock market, its ability to serve as a hedge against volatility, and a stable, predictable cash flow.

Moonshot allows smaller individual investors to participate in pre-IPOs and top-tier private equity deals — the exclusive realm of the ultra-wealthy until now. The company sources the deals through its global network with offices in Zurich, New York, and Hong Kong, and focuses primarily on late-stage, senior deals, and private real estate. To date, Moonshot’s investments have all been exceptionally successful: by using the platform, investors could have invested in SpaceX since August 2021 when the company was valued at USD 46 billion. Even though its current valuation is north of USD 100 billion, the new investors keep subscribing in anticipation of the next funding round, says Moonshot.

Seedrs is a leading UK-based equity crowdfunding platform specializing in Series A funding of hot startups. Since its inception, Seedrs has provided small investors with the opportunity to invest in over 250 startups, including fintech success Revolut. Notably, Seedrs invested GBP 4 million in Revolut in 2017 when it was valued well below USD 1 billion, and today, the company is valued at USD 27 billion.

These three innovators are just the start. Given the growing investment appetite, Cadre, Moonshot, and Seedrs are likely to be joined by more platforms looking to meet the growing demand for alternative investments from small investors. While these new platforms cannot turn back the tide of the major institutional investors that have occupied the public markets for over 70 years, they are creating new, disruptive channels of investments for smaller investors to cut a slice of the cake for themselves.

Keep a close eye as this segment truly takes off.

The Cambridge Associates Private Equity Index is a pooled horizon IRR calculation based on quarterly data compiled from over 8,300 private equity funds, including fully liquidated partnerships, formed between 1986 and 2020. The CA PE Index is not an investable index and is shown for reference purposes only.

S&P 500 Total Return Index as sourced from Yahoo Finance. S&P 500 TR Index data are annually compounded return calculations which are time-weighted measures and are shown for reference purposes only.